The Double Chin Clan Elder of  Heck Ridge Mountain has set a group of Short-beards off on a quest to the castle of Marqest. They must reach the ruins and descend to the third level of the Keep where they must locate and speak with the Green Devil Face.

The Green Devil Face is a sort Oracle, or so it is rumored. The face can be asked questions and it will answer truthfully, well mostly. Anyhow they have been told the Devil Face knows where the missing Helm of Ever-full Tankards is currently located. Now with that knowledge the Double Chin clan has a chance to regain their honor. This is a chance they cannot pass up.

It is a bright  and cloudless morning as the stone-hold door opens and the Heck Ridge Six greet the day. Our intrepid band is made up of the following dwarves:

Dren Hammerhand - a Loan Shark by trade, wears a Viking style helmet, his beard is long & dangly, has 11 remaining teeth, and claims Broken Nose Beer to be the best!

Bonk Shallowgrave - dwarf poet by trade, wears an open face helm adorned with baby red dragon wings, his beard falls in flowing locks, has 3 teeth in the back, and claims Iron Swallow Beer to be the best!

Chen Chan Walla-walla Bing-bang - dwarf sous chef trained in the far-east, wears a demon-masked samurai helmet, his beard is frilly & fragrant, has 5 teeth all in the back, and claims Firewater Full Beer to be the best!

Warmen Stonemill - amateur stargazer & zealous ancestor worshipper, wears a forest green head scarf, his beard is spiked and awesome! Not missing a single tooth (considered quite the milksop by the others), and claims Firewater Full Beer to be the best!


The journey from Heck Ridge to the ruins of Marqest is about a three day trek as a dwarf marches, and our band will be travelling on foot as any respectable Double Chin would.

The days travel started slow, but just around mid-morning Irdle, Bonk, and Chen Chan broke out their instruments ( a cittern, tin whistle, & drum respectively) and had the party join in on a dwarf journey song that goes like this:

At day's end a nice hollow was found just off the trail, and a campsite was set up for night. As Chen Chan prepared the evening meal (he had recently returned home from culinary retreat in the Far-east), Warmen heard the soft tinkle of metal and spurs. Spying on the trail from a hedgerow the dwarf saw a group of heavily armored men heading the same direction they had been. However it seemed they were pushing on through the night. 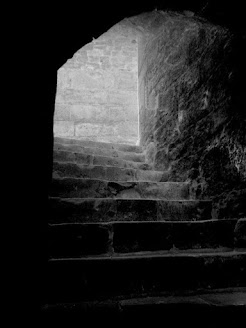 In this same chamber there was a set of stairs descending down to what was surmised to be the first level of the dungeon. The group readied themselves and began their descent into the unknown. Dwarves have a knack for exploring underground constructions, caves, lairs etc. And these preternatural abilities helped the group make quick headway in the lower dungeons. Surprisingly they found the missing Chen Chan who had jumped down the well to avoid the winged devils. An underground resevoir was connected to the first level and it was through this the wayward Chef had been able to rejoin his kin. Also they came upon a barrel full of assorted teeth! From which Irdle claimed a large Orge tusk.
The group set out to find the stairs to the next level down and quickly came upon a mortally wounded fighter in battered armor. The unfortunate victim was quickly dispatched by an expertly thrown iron piton from Irdle that mistook the man for an undead creature.
The dead man's blood trail led our party to the steps to descend to the second level.

This was no ordinary stone sculpture, it was indeed a magical, perhaps even demon possessed piece arcane architecture. And it awoke as the dwarves piled into it's lair.
"Who disturbs my slumber?" bellowed a deep voice from the face in the wall.
The group proclaimed their identity and the reason they had sought the Oracle of the dungeon. For this the Green Devil was pleased and a bargain was quickly stuck. The party would sacrifice an Arm as the price to gain audience! To this the dwarves offered up a dagger to the Devil!!!
"For is not one ARMED, with such an item?" claimed Dren, when the Devil looked perturbed. At this though the face did laugh heartily! "You have done well dwarves, I will give you an answer to what you seek but my price is a meal fit for a King!!"
At first the party was stunned, how would they accomplish such with only their rations. It was the skilled Chen Chan who stepped up then!
"Cousins, give me all your rations and the pit-viper meat we took. My skills can perhaps save us from ending badly!"
Indeed in the end, not only was the meal Chen Chan prepared greatly appreciated by the Oracle, but it even gave the dwarves the location of a hidden exit to escape the dungeon!
With the location of the Helm of Ever-Full Tankards now revealed, they party made good their escape from the dreaded Wine Cellars, and after a bit of carousing they eventually made it home!
Epilogue:
The party did indeed make it home, and eventually it was discovered that not everything was as fortuitous as first thought. As the new moon came round a rash strange events rattled the halls of Heck-ridge with a resounding "Ba-Bawk!!". Sightings of a giant rooster rampaging the Hold were met with much consternation. 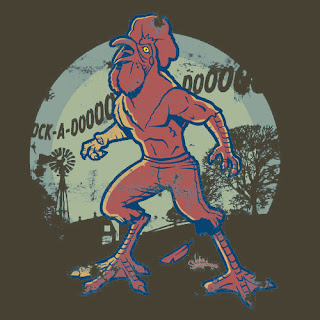 Soon a party would be sent to retrieve the long lost Helm of Ever-full Tankards, but that is a tale for another time......
*** Big Thanks to James V. West (Doomslaker) for all the crazy Red-neck Dwarf stuff!***
Posted by Mightyeroc at 8:21 PM