After finding himself in quite a lot of debt to the locals of the Marqest village Master Blaster organizes his friends and some hirelings are obtained. The group then sets out for the ruins to score big!

Recent rumors about town have spoken of the rumblings of the Secret Underground and the seemingly growing sense of dread overtaking the countryside... is the power of the Duke on the rise?

The party hires a wagon to drop them off just outside the old gatehouse at dawn. The wagon master will return an hour before dark today and again at dawn & dusk the following day. If the party has not returned by then they are on their own to get back to town.

Leonard is quick to note that the outer wall and gatehouse seem to show signs of repair and look to be in better shape than they have for years. Once the group set foot in the inner courtyard they are greeted by the looming presence of Marqest Manor itself!

Both Leonard & Hagar confirm to the others that the rumors must indeed be true as this part of the castle looks vastly different from the last time they were here. Someone or something has indeed been reinstating the ruins to their former glory...

Moving directly to the great double-door entry the group see that a pair of statues now flank the doorway. One is a Griffon the other a Chimera and lying on the ground between them is body of a man.

Rook proceeds to check over the Griffin statue and Leonard looks over the Chimera, Hagar and Mr. Blister hang back for support and stay alert while Master Blaster checks the body on the doorstep.

The statues are both deemed safe and Master finds a small coin pouch on the body, when suddenly the Griffin animates turning its gaze upon the party and screeches "Hahahahaheeeee!" then the Chimera statue animates and casts a spell upon the body which rises as a zombie and attacks Master Blaster! There is a quick melee and eventually Mister Blister splits the zombies head open stopping it in its tracks.

Master then attempts to use the now double dead corpse as a battering ram and ends up covering himself in zombie gore as the body splatters harmlessly upon the heavy doors.

Rook discovers the doors are unlocked and entry is easily gained by simply using the handle and the party peers inside to the large entryhall.

A few beams of morning sunlight slightly illuminate the hall and ornate columns line either side of the once opulent vestibule. Master sees a coat rack just off to the right next to a low bench. There appears to be a cloak on the rack and some items under the bench. Wanting to remove the zombie goo from himself he heads directly over with the intent of using the cloak to wipe himself off. The rest of the party enter warily and continue to look about.

The sound of struggle draws the attention of the group and they all see Master wrestling with the cloak from the rack. It takes a moment for them to realize that their friend is being attacked! The group move in to aid the dwarf and an intense struggle ensues. They realize using weapons and fire on the cloak creature is harming their friend so Mister Blister and Hagar combine their strength to tear the thing off of Master and they succeed!

The cloak-beast is then thrown out the front door and it flies away to lick its wounds. Back inside the party turn their attention to the items that were under the bench. A pair of boots and a walking stick are dusted off. Leonard takes the stick and Master chooses the boots, while Rook has discovered an old hat that was stuck to the top of the coat rack.

The three items suddenly come to life attacking the party! Leonard is knocked out by the walking stick striking him in the head, the boots begin kicking Master in a frenzy of rib-bruising percussion, and Rook is trying to keep the hat from eating his hand!

After a quick battle with the animated items, Hagar is able to stuff the boots and hat into a large sack that the barbarian then throws down the well in the courtyard! The walking stick is broken in half and tossed aside. The bruised party then follow the trail of prior adventurers into a chamber just off the vestibule. Within this chamber the group discovers a stairwell leading down and an old table that has many inscriptions carved into it.

Soon after taking time to scour this chamber a secret room is discovered behind the fireplace. To the great surprise of all they find a magically preserved pantry filled with all manner of fine food and drink!

Master Blaster calls the find a win for all concerned and the party decide to loot the pantry and await for the wagon to return before dark so they can return to the village with their loot and lives!

Once back in the village the party supply the Dog-n-Bone tavern with enough supplies to have a feast for all and regale everyone with the tale of their adventure within the halls of Marqest castle!

Posted by Mightyeroc at 1:56 PM 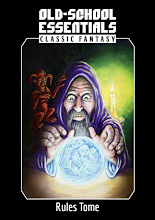