Wine Cellars: A tale of the Sisters of St. Brigid

Word has spread amongst the people of Hemlock hamlet that a recently deceased adventurer has returned from the dead and has been prowling the countryside. Sir Atherol and the Vicar Osrin have summoned a couple of trusted men for an important mission. 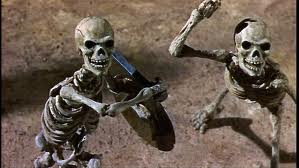 "Bless my soul!" cried the young monk as he stumbled
forward.
He watched in a daze as Gunther laid about with powerful blows and he practically shattered one of the unholy creatures. The second skeleton slashed Gunther across the thigh with a lucky blow, but this only served to enrage the warrior and he shoulder blocked the bone-man to the ground and proceeded to stomp it into grave dust!
Gunther bound his wound and then looked over Sally. "Poor girl, you'll be fine now."
Frederic watched as the old warrior nuzzled his horse and calmed the frightened horse down.  The pair came to the conclusion that evil things were afoot and they would have to move as fast as they could muster and reach the Chapel as quickly as possible.
The night went by in a gloomy haze as Frederic staggered after Gunther in the darkness. He could tell the wound was bothering the warrior as his limp was getting worse and he leaned on Sally for support.
At some point a thick fog rolled in and Frederic could not discern whether the pair was walking in circles or making headway to their destination.
Gunther finally slowed his pace and came to a rest near a large tree. He motioned Frederic to sit and he handed him a flask and a hard biscuit. The fog was actually melting away as the morning sun was rising.
"Goodness, we walked through the night!" noted the young man.
"Indeed we did Brother, and you kept with me. No small task that is." Gunther smiled and chewed on his biscuit. "We need to get our bearings, so have a look about and see if you can spot the road or landmark." The warrior motioned in the direction he wanted Frederic to go and he headed in the opposite, "Don't get lost!" he called out over his shoulder.
Weary to the bone Frederic leaned on his staff and began to look about. The brush was heavy here and there were many trees blocking view. The adept decided to see what lie beyond the thick foliage.
Gunther returned to Sally and rebound his thigh wound with some fresh linen from her saddlebags. It had been about ten minutes since he left Frederic and he wondered if the young fellow had wandered too far.
"Gunther! Over here! Bring Sally."
Frederic called out, and there was no trace of fear in his voice. Gunther walked with Sally through the brush and after a few minutes he found his new friend.
"I suppose this would count as a landmark correct?" the young adept smiled at the Warrior. "We must be very close to the chapel."

"Good work Frederic, you found the road! The Chapel lies just up to the north of here. we should easily make our destination before dark."

Together the pair set off feeling better about not being hopelessly lost in the wilderness.

Sally's wound prohibited anyone riding her, and Gunther was moving much slower as well. Frederic was doing all he could to not collapse from exhaustion himself. He had never been put to such physical exertion before, and found that he was drawing upon an inner strength he hadn't known he possessed. The party took a half dozen short rests and Frederic never let on that this was for any reason other than himself, though he knew Gunther was putting on a front.

"Gunther, let me lay hands upon your wound. It is within my powers to do so."

The old warrior grimaced, and kept limping along. "Bah, this is nothing and I've suffered far worse in my day. I'd rather you keep that for when we really need it than to end up lamenting later."

As dusk set in and a fog began to rise again, the pair sighted their destination just ahead. The Chapel of Saint Brigid was a welcome sight and the men were eager to rest and recuperate in the safety of its walls.

With Sally stabled and her wound treated, the men took refuge in the main hall of the Chapel. There they conversed with the Sisters and gave the letter to the Headmistress.
"You shall rest for the night and have a hot meal. In the morning we can bless the sword and prepare it for travel." The Headmistress motioned for a pair of nuns to get food for Gunther and Frederic, "I have sensed a faint evil growing nearby, but nothing untoward has occurred here. The wards of St. Brigid should be more than enough to keep any bone-men from our doorsteps." 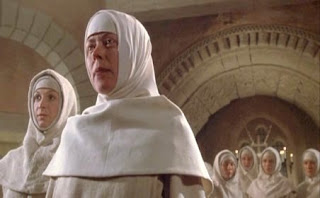 "Many thanks Sister," Gunther made the holy sign before tucking in to the bowl of hot stew that was set before him. Frederic did the same and both men began to relax. "Frederic and I are in your debt. We weren't sure that this place hadn't been already besieged by darkness after our encounters on the road."
"Your are both welcome, and may rest easy now. Finish your meal and rest here. We will speak more in the morning." The Headmistress turned and left with the sisters through a heavy side door that led out of the main hall. The sound of a heavy bolt being drawn followed the closing of the door, and Gunther smiled to himself. The nuns had locked the two of them in the Chapel itself, even though the men were of good nature the sisters rules were strict. The old soldier felt more weary than he thought he was and his leg ached terribly.
"Gunther, please let me heal that." Frederic stood and came around to Gunther's side of the table.
The soldier huffed but allowed the young adept to call upon the power of the Saints and heal the wound in his upper thigh.
Frederic was unsure how long he had been asleep, but something stirred him awake. Opening his eyes he could see the hall was dimly lit by a low burning lantern hung from the ceiling. He rolled to his right and could see Gunther laid out upon one of the long pews snoring away under a blanket. Again something caused the young man to feel alerted! 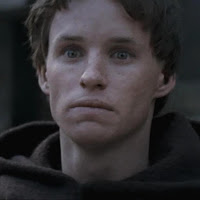 Sitting up and reaching for his staff, Frederic looked about the hall and saw that the door through which the sisters had left earlier were slightly ajar. He stood and began to move towards the open portal when a voice called out to him from a shadowed corner of the hall.
"What a strong young man you are Brother, you shall wet my appetite indeed!"
Peering into the gloom Frederic was surprised to see one of the sisters in her nightshirt moving towards him, her eyes seeming to pierce the young adept like a dagger made of ice. His heart thumped in his chest, a cold bead of sweat ran down the back of his neck. His arms and legs seemed locked in place and it was all he could do to hoarsely whisper his companions name in a pathetic warning....
The woman stalked closer to Frederic and he could feel waves of bone-chilling cold emanate from her. It frightened and excited him at the same time, he felt for sure she was going to do something far worse than just kill him. His eyes darted to the slumbering soldier and he whimpered through his clenched jaw! 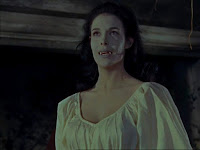 "The big one was drugged," the pale sister cooed, "we knew he was the stronger of you and we wanted no resistance from him. You however, are a servant of the Saints and we want to relish our chance to defile you!"

The unholy-nun raised her hands and bared her fangs as she lunged at the paralyzed young man! "I will bathe in your blood!"

Frederic closed his eyes and prepared himself for death when a deep growl and the sound of movement to his left made him peek through one eye!

It was Gunther! The old soldier had flung his blanket over the vile sisters head and followed that up by smacking her in the face with the butt of his crossbow. The Nun screeched and fell back across the table tearing at the blanket!

"Snap out of boy!" Yelled Gunther at Frederic, as he raised the weapon to firing position. He pulled the trigger and the bolt shot directly into the center of the sisters chest pinning her to the table!

The spell broken, Frederic reacted by knocking the lantern from its hook, catching it and smashing it on the creature that was squirming on the table! "FWOOSH!!" a cloud of flame burst in the room!

"May this fire cleanse your soul and by the power of Saint Brigid I rebuke thee!" Frederic brandished his holy symbol at the former holy-sister now engulfed in flame!

Her screams seemed to pierce the night and she ripped herself from the table and turned to face Frederic. "Aaaahhhhhh!"

Gunther stepped between the two and with a single blow he severed the burning woman's head from her body! "Open the entry door!" Gunther commanded the young man. Frederic lifted the oak plank that barred the door and pulled it open. Gunther proceeded to then give the smoldering head a swift kick sending it out the doorway and bouncing down the steps of the Chapel. Frederic slammed the door shut and barred it again. He slumped to the floor breathing heavily and looked at Gunther... "Were you awake the whole time?"

"Not the whole time, besides I wasn't sure if I should've intruded on your budding romance." Gunther grinned and winked at him.

Frederic stood and brushed himself off. "Well I'm glad you did!"

Collecting his dropped crossbow Gunther moved towards the doorway of the chapel interior. "I suppose we best find that sword ourselves then, eh?"

The pair of adventurers delved deeper into the Chapel and soon found the desiccated remains of a handful of nuns in their cells. Soon the men found their way to the lower crypt and basement of the site and came face to face with the fallen Headmistress now wielding the fury of hellfire upon our heroes! 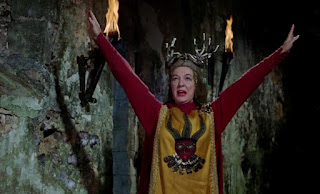 The pair faced off against the vile witch who summoned a Hound a hell and a Gargoyle to battle the men!

A pitched battle was fought, scrolls of protection were read and vials of Holy water thrown about! In the end the men were victorious by the skin of their teeth.

The Holy weapon was retrieved and brought back to Hemlock.

More adventures to come in the haunted lands of Marqest.....

Posted by Mightyeroc at 4:56 PM